You can also join the community on Discord
Thank you!
By DragonSpark Games at January 25, 2019 No comments:

Release of Prototype and move to Development Blog

I haven't stopped working over the past month and over the holidays, but it's certainly paid off!
I've now released the first prototype (and now patch) for my game. Over December I achieved all of my goals of pollishing features and creating a good core experience for releasing the game as a prototype in January.

I will be moving over to using my game's Development Blog from now on, which you can find from the game's page on Itch.Io page below.

Please keep up with my progress over there or on twitter @DragonSparkGame!
Cheers!
By DragonSpark Games at January 07, 2019 No comments:

November was a very busy month! I was introduced to several interesting people and events and also planned and developed more of the game prototype for it's first release in January.

November was full of small fixes and quality changes that were suitable to do in the small amount of time outside of business events and duties. Along with this I also set up the path tree system, which I hope to grow in to a unique, fun feature of the game.

There where a few intricacies to this system, such as unlocking (and locking in the case of two skill buttons on the same path) the correct buttons at the start and when a button is pressed/unlocked. This was easily solved by making a class that stores all the elements needed for the skill buttons including but not limited to; the type of buff/upgrade the button gives, the button(s) that it unlocks, the button(s) that it locks, it's locked/unlocked/inactive state and a buff description that shows in the tooltip.

Moving forward in December, I plan to finish the first truly playable prototype which is very exciting! This week I am working on the battle system, namely making it more repeatable, customisable and player ready.

If you're not following on twitter already, check it out! Most of my updates are posting there from now, although I'll be keeping the blog updated with my development progress, plans and goals from time to time.
Thanks for reading!
By DragonSpark Games at December 04, 2018 No comments:

Just a quick update!
I've been working hard on the floor system for the game and have set up the base system, but there is a lot of polishing to go. 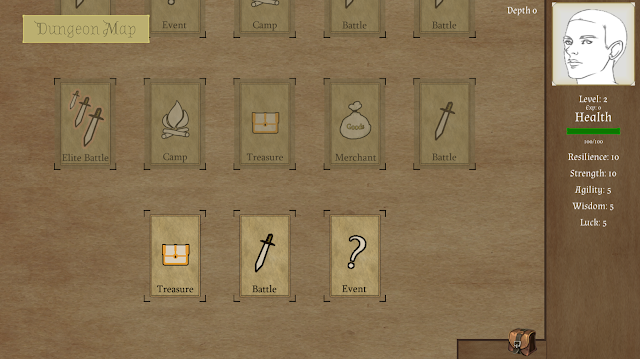 This is what the dungeon screen is looking like right now

If you're not following on twitter, please check it out here.

I will be posting smaller updates there, along with gifs and other cool material!
Thanks for reading.
By DragonSpark Games at November 12, 2018 No comments:

October Progress and Goals for November

A lot has happened behind the scenes over the last month since the last dev blog. It's hard to show everything that has been worked on but I'll try to briefly summarise the changes to the game and the plan for the next month!

So over the last month (since the last dev post) I've:


Many of these aren't really relevant to talk about here, but the biggest changes by far where the inventory saving and path system.

The inventory saving is working by going through a loop and, depending on if the inventory slot holds an item or equipment, saving each variable of the item in to a designated slot in the PlayerPrefs through Unity. This is the most convenient way for me to sort saving and loading right now and is working quite nicely so far!

The path system is also a big upgrade. I am designing it to be a much more flexible and adjustable version of the upgrade tree system that can have points that are able to be reallocated depending on the dungeon or build the player wants to try.
At the moment I've only got a brief animation to show them. No stats or trees plugged in yet, but there will be!

Moving forward, this month I will be polishing several parts of the game to fill out the features a bit more and work on general fixes. I'm also looking to add a floor system to the dungeon to allow me to start building an actual interactive experience rather than a feature showcase. This is likely going to be a lot of work so I expect it to take up most of the time this month.

I'm looking to have a decent, playable, prototype by January so there's going to be a lot going on!
Dev blog posts may stay more infrequent and be more brief while I crunch to get things done.
The next dev blog will likely be about the floor system and all the changes. Until then!

By DragonSpark Games at November 01, 2018 No comments: